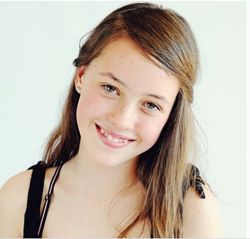 Morgan, a 13 year-old girl, was abandoned by her biological father while they were visiting relatives in Pennsylvania. Due to her mother’s substance abuse and mental health issues, Morgan had been living with her father for many years in New Jersey. Morgan refused to be reunited with her father because she said he was often drunk and became angry. New Jersey’s Division of Child Protection and Permanency (DCPP) became involved, and Morgan was placed with her maternal grandparents in New Jersey until her case could be resolved.

A CASA volunteer was appointed to be Morgan’s advocate. Morgan was very clear that she did not want to return to live with her dad, but she did want to remain with her maternal grandparents. The CASA volunteer, Lucille, went to the grandmother’s house regularly, and met with Morgan who was reluctant to connect. Lucille gradually found out about Morgan’s artistic interests, and engaged her in art projects. At holiday time, Lucille used the CASA Holiday Gift Program to secure a hard-to-find rainbow loom that Morgan desperately wanted. Lucille also checked in regularly with the grandmother to help her keep track of court dates and related issues, as well as offer support during the difficult times of raising a child in your later years. Overall, the CASA volunteer guided the grandmother through the court process.

During this time, Morgan’s mother was released from a psychiatric facility. She secured an apartment, and became stabilized on medication. Reunification between Morgan and her mother was a consideration, however, Morgan’s mother shared with Lucille that she did not feel capable of caring for a teenager full-time, and her daughter had so many more resources at her grandparents’ home with extended family living nearby. In lieu of reunification, Morgan’s mother visited her daughter at her parents’ home where she could become reacquainted with Morgan and begin to build a relationship. During these visits, Morgan enjoyed spending time with her mother, and getting to know her. Eventually, Morgan’s mother surrendered her parental rights to pave the way for Morgan’s best interests and adoption by her grandparents. Lucille offered support to Morgan, her mother, and grandparents during this difficult time.
As part of Lucille’s duties as an advocate, she communicated frequently with Morgan’s therapist to get a clear picture of how Morgan was adjusting, and how Morgan’s visitations were progressing with her father. There were issues with her father abusing some of his phone privileges with Morgan by calling his daughter at all hours of the night. Lucille made sure that the court discussed these violations with the father and set boundaries for him. Morgan communicated to her dad how happy she was with her grandparents, and requested that her father surrender his parental rights so she could be adopted. By now, she had turned 14, and eventually her father agreed to allow Morgan’s maternal grandparents to proceed with her adoption. Lucille was there to comfort the father in court after he surrendered his rights, as he was visibly distraught.

This case demonstrates the role of a CASA volunteer who is primarily appointed to advocate for a child’s best interests, however, who is also there to provide comfort and the connective tissue for extended families. Throughout the duration of this case, Lucille visited Morgan frequently, helped her with school work, artistic pursuits, her extracurricular school activities, and discussed career and future interests. Lucille was a constant presence in Morgan’s life during this time until she was adopted by her grandparents. Lucille also offered her knowledge and comfort to Morgan’s maternal grandparents and birth parents. She helped them all understand what was in Morgan’s best interests. The result is one happy young teen thriving in a safe, loving environment with her grandparents and extended family.